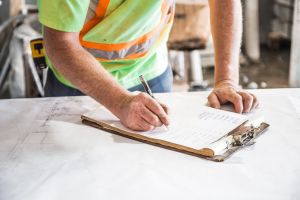 Asbestos surveys come in all shapes and sizes as you go back in time. There are good surveys, bad surveys and everything in between. However, if you have a survey(s) dated between 2000 – 2006, there are often a number of issues with these surveys from this era and our advice would be to have an urgent review.

To understand why, you need to realise what the legislation and marketplace was like back then.

Managing asbestos in buildings from 2000

To keep this simple, all asbestos use, sale, production etc was banned in late 1999. There was no real, formal directive to ensure asbestos surveys were being carried out, other than prior to works being undertaken until 2002, when the Control of Asbestos at Work Regulations came in to force.

If you were working as an asbestos surveyor around that time, you may have noticed how completely different it is to today.

Around 2000 -2001, RB Asbestos would have around half a dozen enquiries a month for asbestos surveys. When the regulations changed in 2002 they become daily.

On two successive days we had enquiries to survey 1800 betting shops and 280 local schools. We turned them both down because we didn’t have the surveyor capacity. By 2006, problems with asbestos did start to ease, but in some circumstances, continued to be found until the end of the decade.

Surveyor capacity was THE fundamental problem. There wasn’t anywhere near the number of surveyors required to undertake the workload. The qualification for a surveyor back then was a three day course, where a number of ‘operators’ trained staff and the following week they were on the road conducting asbestos surveys.

As a result, many of these surveys conducted were poor due to a lack of training and often rushed, as the surveyor had more premises to get to. Surveys were typified by a number of common themes;

Other than the lack of training and field experience, in our opinion, the ‘caveat’ was the main issue. In modern reports caveats are generally listed in the ‘Asbestos Register’ on the basis that, if you cannot access something, it should be treated as though it contains asbestos.

Previous to 2000, Caveats were often buried at the back of the report. RB Asbestos have earlier seen a report which stated “no access above 1.8m” and many similar onerous statements. You may be therefore unaware that many parts of the property you control, were not even surveyed. These could include:

In conclusion, reports from this era don’t conform to modern standards and your property could be at risk. As specialist asbestos consultants, we would suggest reviewing your documentation, particularly with larger portfolios, to ensure information is updated.

If you need any help or general advice on asbestos surveys then please contact 0800 141 2676. If you can’t speak to one of our advisers over the phone right now, you can also contact us online.

RB Asbestos provide multi-site asbestos surveys to businesses, as well as asbestos surveys for large and small properties across the North West. For more information, see which asbestos management survey will suit your requirements.