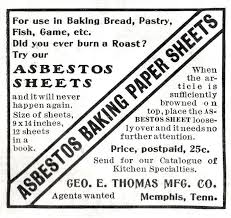 For much of the 20th century, asbestos was used in a countless number of products because of its ability to act as a fire retardant.

While asbestos was initially used in construction projects, its popularity spread as it began to be used in consumer products such as cigarette filters, protective clothing and even cooking supplies. – If only they knew!

At the height of its use, asbestos was considered the best way to prevent fire damage.

The baking sheets were designed to prevent chefs from burning food while baked in the oven. At this time, many cooking appliances were still coal or wood fired so temperature regulation was difficult.

The company claimed that by putting the sheet on top of browned food, the chef could prevent further charring while allowing the food to cook thoroughly.

Most asbestos sheet advertisements presented themselves as the miracle remedy for a problem – little did they know they would turn out to be the killer remedy!