Asbestos was widely used in the building industry in the 1960s and 70s but it was banned in the UK in 1999, after a link was established to a number of different lung diseases.

“I think it was in the ceiling tiles and I presume it was in the walls where I used to pin the children’s paintings” said Jenny Darby, 71, a science teacher between 1969 and 1996.

She does not know where she was exposed to the asbestos that caused her mesothelioma – a rare form of cancer almost always caused by exposure to the substance – but thinks it might have been in one of her classrooms. Asbestos was also in her lab equipment. 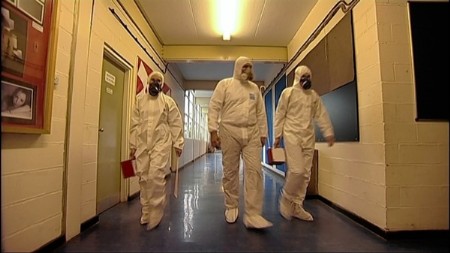 There are no statistics to suggest how many people might have developed mesothelioma due to asbestos exposure as a pupil, but the Committee on Carcinogenicity suggests a child first exposed to asbestos aged five has a lifetime risk of developing the cancer about five times greater than that of an adult first exposed aged 30.

Figures show asbestos is still present in nearly nine out of ten schools in the UK – higher than previous official estimates.

It can be managed safely if it is left undisturbed but there have been calls for urgent action to make schools safer.

Schools can protect children and teachers from the deadly dust by ensuring they have an Asbestos Management Plan in place.